On Saturday, I received an email with subject “Buffer has been hacked – here is what’s going on”. As an ardent Buffer fan and user, my first reaction was “Oh my god. What must have happened to my tweets/ Facebook posts?”. But when I opened the email, I was up for a pleasant surprise. Yes, I am saying a “pleasant surprise”. Here is why:

#1: The email did not beat around the bush but clearly stated the fact that buffer has been hacked and it’s a problem which needs to be handled. At the same time, the language and tone clearly showed that the Buffer team was concerned and apologetic about what happened. While things can go wrong with anyone, finally taking the ownership makes or breaks the deal.

#2: The email clearly stated what needs to be done next – which is most important.

#3: While the Buffer team was working round the clock for solving the problem, it made sure that team members were posting constant updates on their live blog, Facebook and Twitter. Having worked on software products for a considerable period in my career, I can fully understand how difficult it must be for the team to handle the issues and solve the technical problems. But at the same time, they made sure that they don’t keep the users in dark. I was amazed to see updates almost after every couple of hours.  The frequency of the updates clearly showed that the team was working round the clock over the weekend to take care of this crisis. 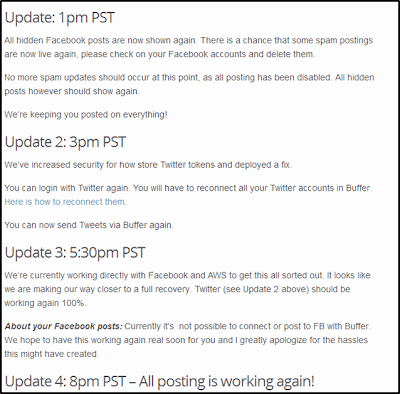 #4: Here is what completely amazed and blew me away. I posted a tweet congratulating the buffer team for their excellent crisis management and I got a personalized response. Note that buffer has 145K followers and I can only imagine the flood of mentions it must have got after the hacking incident. Responding to each tweet – that too in a so much personalized manner in incredible!

The personalized signature at the end of the tweet from Buffer team made me look at their “About Us” section to know really who the members are. What increased my respect for the team is the fact that the buffer team is only 13 people and the people who responded to my tweet did not necessarily belong to “marketing” or “social media” department. Belle is the Content Crafter there and Brian is the Designer!  Yet again, a fine example to emphasize the fact that marketing is no more confined to marketing department. 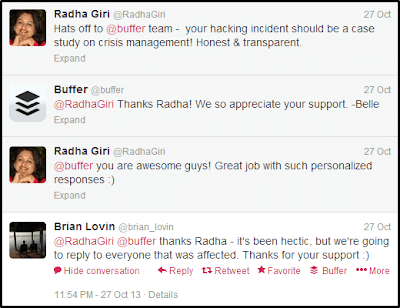 Key takeaways from this:

Have you witnessed any other fine example of crisis management using social media? Share your comments!